Following the FMNR training and visit to Aileu in December 2017, four farmers have allocated areas to FMNR.  The areas were mapped by the field team in June 2018, ranging from 0.4 ha to 3 ha.  The sites are different in tree composition with one located in a drier, windier part of the project area where the dominant species is Eucalyptus alba (local name is Ai-Bubur). The other 3 sites are located in more humid areas where the dominant species is Eucalyptus urophylla (local name is Ai-Ru). 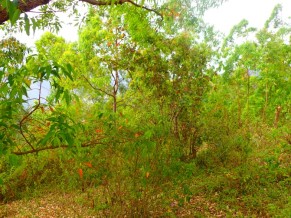 The farmers were asked about activities they are conducting in their FMNR sites. They  typically harvest the most defective stems (i.e. less straight) for firewood with the remaining stem left standing to be used in the future for construction. One of the farmers (Mr. Martins) mentioned that he allocates at least 1 day per week to managing the site. Other farmers have been less active for lack of time. An issue identified by both farmers is that some neighbours enter their areas to cut some their trees and others let animals to roam their sites freely. They suggested that the local authority (Chef de Suco – Chief of Village) should inform the community of the need to “respect their work and sites”. Tara -Bandu was also mentioned by them as a strategy for protection of these sites. Farmers are keen to host other farmers  to show them their work and the benefits of FMNR for tree growth and sustainable harvesting.  They pointed out that awareness of FMNR within the community is still needed, although they also mentioned that lack of land, time and interest were limiting factors for not having more farmers practicing FMNR in the project area at present.